This was the weekend of the marathon and scarily there was no turning back, there was no more training, no more backing out, no more excuses.  Picked up my number the night before and was ready to go after one more sleep. Was lovely to get so many good luck messages from friends and family, it really helped me to prepare for the event and was nice to know so many were looking out for me.

A look at the cup. Thanks Dave for the Pic

The day of the marathon I had a simple breakfast and we met friends from different local running clubs in South Wales walked to the start line, said our goodbyes/ good lucks as other guys were different speeds, I gave Jenny big hug along with Bethan and Hannah and then it was off to the start line. 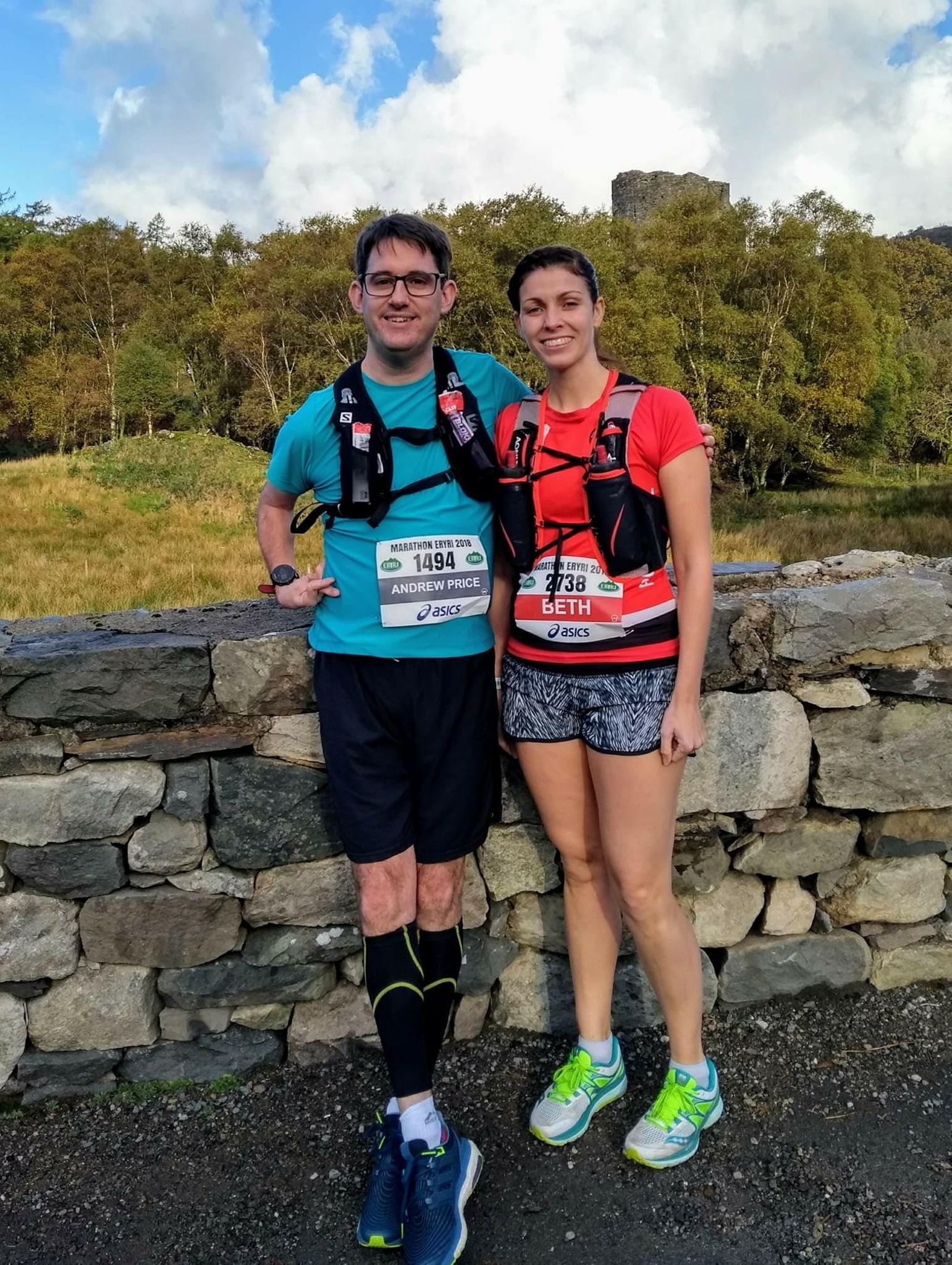 I started with Beth above, not be confused with my daughter,  which was lovely as we had done so much training together, it was great to have the support and company to start the marathon with. After a few nervous moments, we heard the countdown, 10, 9, 8…. and the rumble started. We were off.

The first few miles I managed to keep relaxed and warm myself up and the elevation was low at this point. My main aim was to keep a level pace and effort so as not to become out of breath. The distance seemed to go on and on, but I managed to make it all the way to the top of Pen-Y-Pass, without stopping slowing slightly, at which I looked over to see Lou Summers shouting go “Andrew Price woo hoo”, this was nice as Lou was the one who was there at the start of my running journey and helped me to get running in the first place after back problems.

I ran down the hill sticking to stable 9:20 pace as I didn’t want to overdo it, and needed to recover from the five miles up that I had just run, I just kept going and got to the trail area, still feeling strong. I ran with Beth for the next 10 miles on and off through the undulating roads through Bethania and Beddgelert. Many people shouted Go Beth, but not many “Andrew Price’s” I think most people didn’t get my nickname #rookiemistake

I managed to keep my pace consistent at 9:15ish pace and miles went fairly quickly as I got into the groove.  I hit the second hill at thirteen this again didn’t seem too bad, but it was fatigue was starting to hit as I got towards the top at Beddgelert Forest. One thing that didn’t help was people walking with bikes up the hill, and several taking selfies and pictures of random people, did my head in as I was trying to run and they kept getting in the way, ha ha, im usually so patient!

Anyway back on track, I reached the aid station and rested for a few seconds to take in some oranges, and tailwind and some Gel. I then pushed on for another few miles, it was cold now for the first time the crosswind was hard and made my arms cold. I push on through the miles.

When I reached Rhyd Ddu I found it much harder to keep pushing and I had an ache on my right foot, however, I was determined to keep going, I just didn’t have the same power in my legs, but this marathon was not going to beat me so I just kept running. I made it through Betws Garmon and then to Waunfawr.

As I crossed the Bridge to Waunfawr, sadly my legs just couldn’t keep going so I took the hard decision to slow down.

I walked through Waunfawr and well, what can I say the support was brilliant, so many lovely locals cheering me on and giving a cheer, kids with bags of much-needed jelly babies, I gave high fives, said my thank yous and kept pushing on, admitadly at a slightly slower pace. I was getting overtaken at all corners, but I just didn’t care, I had a lot of people running wishing me well and everyone seemed really friendly.

I was told this hill was 1 mile, but after what seemed like 5, I finally made it to the top and the terrain changed to a gravel path, I found it hard coming down but just smiled and dug in. I hit the twenty-five mile banner and that was amazing to see.

I went down the path and started to speed up again as I hit the tarmac, it was still fairly difficult as it was so steep but I made it to the high street turned right and saw the finish line. Only two hundred meters to go, I dug in and ran, I heard some cheers and looked to my right and saw Dave and Bethan cheering me on, it was lovely to see, a few more and I saw Jenny, Bethan and Hannah. Hannah jumped over the banner, grabbed my hand and started to sprint, she said she was so happy and proud of me, the only problem was that I could not keep !! up so she slowed down and we jogged in together. It was a very precious moment that I will always cherish.

I finally had finished a marathon, and a hilly one under 5 hours before I am 40, many ticks checked!

I got my first coaster  “Woo Hoo”.  I welled up, I was quite emotional I was swiftly met by Jenny, Bethan and Hannah,  Dave and Beth, who had both finished before me with fantastic times, Bethan had a new marathon PB, amazing result and Dave had a storming race, especially after all the Ultras and other challenges he has undertaken this year. Group hugs all around. What a day. what a race !!

That coaster and T-Shirt !!